Latest reports reflect that the Jewish Agency emissaries are safe and sound in the Gondar airport, waiting for flight out. 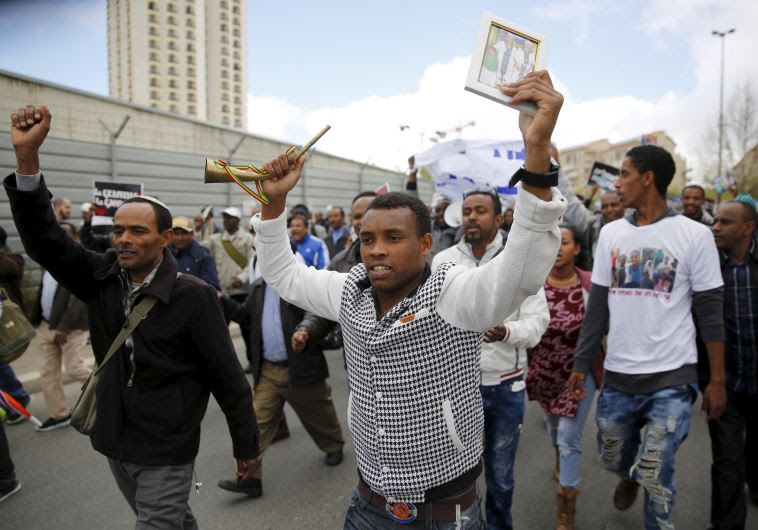 Israelis of Ethiopian descent take part in a protest in Jerusalem calling on gov't to bring the remaining members of their community living in Ethiopia, known as Falash Mura to settle in Israel, March 20, 2016. . (photo credit:REUTERS)
The Foreign Ministry and Jewish Agency moved a group of 23 Israeli youth volunteering in Gondar to the local airport on Wednesday, awaiting a decision whether the volatile ethnic tension there merited flying the group out of the region.

Violence between the Amhara and Tigray ethnic groups there led to 10 deaths on Tuesday, and – as a result – the group was moved to a secure building in the city, and from there to the airport.

Some 6,000 Jews waiting to immigrate to Israel live in Gondar. Foreign spokesman Emmanuel Nachshon said that at this time there was no decision to move them out as well. He said that the Jews there were not in immediate danger, nor the focus of the tension
In addition there are an undetermined number of Israeli tourists believed to be in the region, but – as the situation on Wednesday started to calm down – there was no decision taken to attempt to locate or evacuate them

Ethnic fighting recently broke out between the Amhara and Tigray groups when armed forces from the Tigrayan People's Liberation Front (TPLF) entered Gondar, a city with a majority Amhara population, early Tuesday morning.

The forces have since arrested prominent local political lobbyists and have been accused of committing massacres, increasing violence.

Regarding the 23 volunteers, Nachshon said they were moved to the airport “to be on the safe side.” Afterward, he said, there will be a reassessment.

The volunteers are part of a Jewish Agency program called Project Ten, in which Israelis and young Jewish adults  from the Diaspora work in a number of countries – Ethiopia, Ghana, Mexico, and South Africa and Israel – in various agricultural, educational and health projects.

The Jews in Gondar have been stuck in limbo in Ethiopia. Their situation is compounded by the fact that living conditions in the city are harsh. Not only is there abject poverty and extremely high unemployment, but, because these people are identified as Falash Mura, they are also largely ostracized from mainstream community life.

The group has also been troubled by issues with immigrating to Israel. Around 9,000 people have been waiting in Addis Ababa and Gondar transit camps for the past several years in the hopes of making their way to the Jewish state. However, Jerusalem closed its doors in 2013 following a ceremony at Ben-Gurion Airport at which officials declared the “end” of Ethiopian aliya.

The fate of the prospective immigrants has been a matter of some debate, with Ethiopian- Israeli activists protesting what they portray as the breaking up of families.

According to a cabinet decision, any Ethiopian who moved to Gondar or Addis Ababa after January 2013, is willing to convert to Judaism, and has relatives here who can apply for his acceptance, will be eligible to move.

Netanyahu's administration has been accused of "looking for an excuse" not to bring the rest of the Jews of Ethiopia to Israel.

Latest reports reflect that the Jewish Agency emissaries are safe and sound in the Gondar airport, waiting for flight out.
Posted by Guihon at 1:27 PM