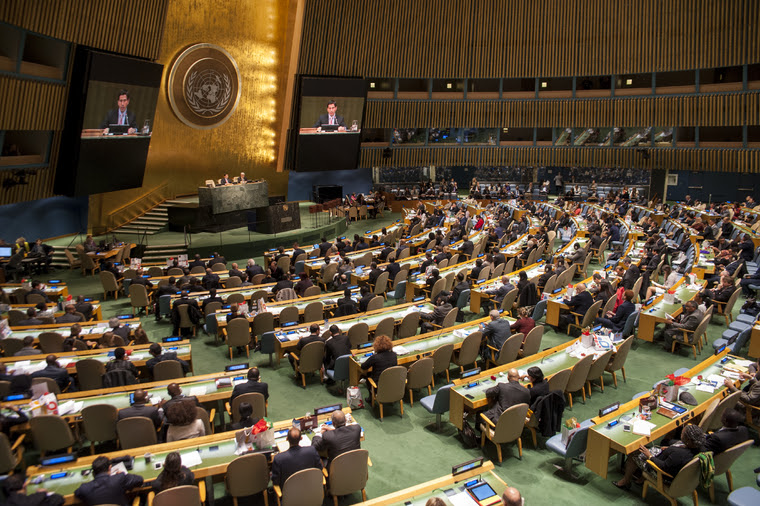 A wide view of the General Assembly Hall during the meeting, which was chaired by Ambassador Federico Alberto González Franco (on screens), of Paraguay and Vice-President of the General Assembly. UN Photo/Cia Pak
‹›
The following States will also continue as members of the Human Rights Council: Albania, Algeria, Bangladesh, Bolivia, Botswana, China, Congo, Cuba, El Salvador, France, Ghana, India, Indonesia, Latvia, Maldives, Mexico, Morocco, Namibia, Netherlands, Nigeria, Paraguay, Portugal, Qatar, Russian Federation, Saudi Arabia, South Africa, the Former Yugoslav Republic of Macedonia, United Kingdom and Viet Nam.
Beginning in 2013, the Human Rights Council is expected to start its yearly membership cycle on 1 January. As a transitional measure, the period of office of its members ending in June 2015 has been exceptionally extended until the end of the calendar year.
Created by the Assembly in 2006, the 47-member Council is an inter-governmental body within the UN system responsible for strengthening the promotion and protection of human rights around the globe and for addressing situations of human rights violations and making recommendations on them.
All of its members are elected by the world body's General Assembly, and it has the ability to discuss all thematic human rights issues and situations that require its attention throughout the year. It meets at the UN Office at Geneva.
On the basis of equitable geographical distribution, Council seats are allocated to the five regional groups as follows: African States, 13 seats; Asia-Pacific States, 13 seats; Eastern European States, 6 seats; Latin American and Caribbean States, 8 seats; and Western European and other States, 7 seats.
News Tracker: past stories on this issue
General Assembly elects 15 members to UN Human Rights Council
Posted by Guihon at 5:54 AM No comments: