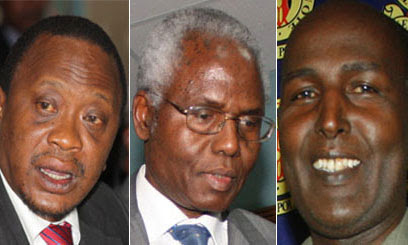 The elaborate evidence details how Mungiki leaders and their members were transported to State House, Nairobi for a strategy meeting to plan a series of coordinated attacks in various parts of Rift Valley.

And soon after the State House meeting which was attended by high-ranking government officials, the Mungiki militia were given specific instructions and assured that no police officer would interfere with their mission.

Mr Ocampo says he has evidence to prove that the State House meeting was held on January 27, 2011. But on learning of the allegations on Friday evening, the Presidential Press Service sent a terse statement denying that any such meetings involving the Mungiki ever took place at State House Nairobi.

“We refer to reports attributed to ICC Chief Prosecutor Luis Moreno Ocampo claiming that there was a meeting with Mungiki at State House. The reports are reckless, baseless and untrue. As we have previously stated, State House has never hosted any meeting of the Mungiki as claimed by Ocampo,” read the PPS statement.

In his documents, Mr Ocampo claims Mungiki who had been earmarked to carry out the attacks were “mobilised through text messages requesting them to report at specific locations in Nairobi from where they were picked up by Citi Hoppa buses and transported through secret routes to the State House in Nairobi.”

“Upon arrival at the State House, the Mungiki members were addressed by a Mungiki leader in the presence of senior government officials,” he added in the evidence he intends to table during the Confirmation of Charges hearing scheduled for September 21 at The Hague, Netherlands.
After the State House meeting, Mr Ocampo said the Mungiki attackers were loaded on military trucks and given brand new machetes to use to attack people in Naivasha.

“The trucks contained brand new machetes as well as wooden clubs which the Mungiki were instructed to use for the battle in Naivasha,” the document states.

The Mungiki were broken up into groups of 10 fighters each to be commanded by an experienced Mungiki member of the military wing, Mr Ocampo says in his evidence.

“The strategy employed by the attacking Mungiki and pro-PNU youth was to deploy secretly through the forests on the outskirts of town, mix with the other local Kikuyus to swell the numbers available for the fighting, deploy simultaneously in different places in town, monopolise the attention of the authorities and efforts of the Kenya Police and demand the lifting of a curfew within the town and withdrawal of a unit of deployed prison guards who they accused of harassing the local population and supporting the ODM,” Mr Ocampo states.

The prosecutor goes ahead to release graphic details of how the youths carried out heinous attacks on members of the Luo community in Naivasha.

“In one incident, a perceived ODM supporter was ambushed by a group of pro-PNU youth who cut off his testicles and placed them in his hands before cutting off his penis and putting it in his mouth,” Mr Ocampo said.

The next day, Ocampo says, the victim’s headless body was found lying on the road. “The attackers had mutilated his body in front of his five-year-old son.”

Several other attacks were carried out in Nakuru and surrounding areas following meetings at State House Nakuru which was arranged by a former KANU MP.

Regarding Deputy Prime Minister Uhuru Kenyatta, Ocampo says he has evidence showing he is the one who funded and coordinated Mungiki activities, having developed links with them long before the post election violence of 2007/08 due to his wealth and what the ICC Prosecutor terms as “privileged background.”

“Kenyatta mobilised, armed and financed the Mungiki and pro PNU youth for the purpose of carrying out operations in the Rift Valley during the PEV through a series of meetings held in Nairobi between the end of December 2007 and end of January 2008,” Mr Ocampo says of the Finance Minister who is seeking to replace President Mwai Kibaki who retires next year.

Mr Ocampo states that he has obtained evidence showing that indeed Ambassador Muthaura had placed a telephone call to the then police commissioner Ali urging him to ensure the Mungiki attackers were not interfered with at all.

“In one of the meetings in Nairobi in early January 2008, Muthaura requested Mungiki leaders to deploy their members to the Rift Valley to carry out retaliatory attacks. Muthaura also assured the Mungiki leaders that the police would not interfere with their work. During the meeting, he placed a phone call to Ali to instruct him to ensure that pro-PNU youth would not be prevented from going into the Rift Valley.”

“During another phone conversation with Ali in mid January 2008, Muthaura reminded Ali that the Mungiki were working with them and ordered him not to arrest them,” Mr Ocampo says of Ali who is now the Postmaster General.

Both Ali, Muthaura and Uhuru have maintained innocence against the charges levelled against them and have indicated they have strong evidence, including witnesses to defend them when they appear at The Hague on September 21.

Posted by Guihon at 3:13 AM No comments: