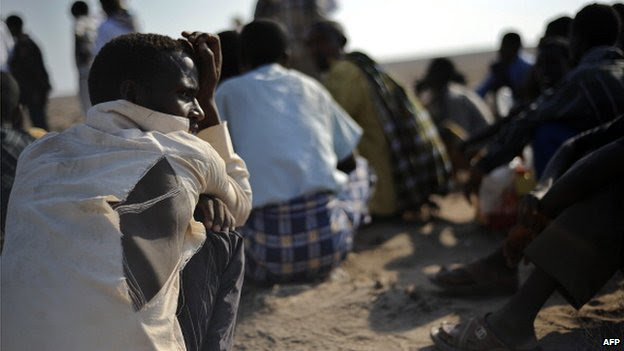 Ethiopia has "ruthlessly targeted" its largest ethnic group for suspected links to a rebel group, human rights group Amnesty International says.
Thousands of Oromo people had been subjected to unlawful killings, torture and enforced disappearance, it said.
Dozens had also been killed in a "relentless crackdown on real or imagined dissent", Amnesty added.
Ethiopia's government denied the allegations and accused Amnesty of trying to tarnish its image.
It has designated the Oromo Liberation Front (OLF), which says it is fighting for the rights of the Oromo people, a terrorist organisation.
'Missing fingers'


At least 5,000 Oromos have been arrested since 2011 "based on their actual or suspected peaceful opposition to the government", Amnesty said in a report entitled Because I am Oromo - Sweeping repression in the Oromia region of Ethiopia.
Former detainees who had fled the country described torture, "including beatings, electric shocks, mock execution, burning with heated metal or molten plastic and rape, including gang rape", it added.
Amnesty said other cases of torture it had recorded included:
It compiled the report after testimonies from 200 people who were exiled in countries like Kenya and Uganda, Amnesty said.
"We interviewed former detainees with missing fingers, ears and teeth, damaged eyes and scars on every part of their body due to beating, burning and stabbing - all of which they said were the result of torture," said Claire Beston, Amnesty Ethiopia researcher.
Ethiopian government spokesman Redwan Hussein dismissed Amnesty's report.
"It [Amnesty] has been hell-bent on tarnishing Ethiopia's image again and again," he told AFP news agency.
Ethiopia is ruled by a coalition of ethnic groups. However, the OLF says the government is dominated by the minority Tigray group and it wants self-determination for the Oromo people.
Posted by Guihon at 2:53 AM