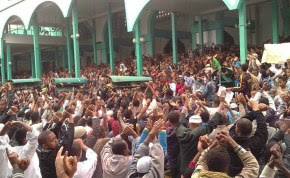 Ethiopian Muslims take part in protests in Addis Ababa (file photo).
Paris — Human Rights Watch has expressed grave concern on the prosecution of 29 Muslim protesters in Addis Ababa, including nine prominent Islamic leaders who are being tried under Ethiopia's controversial anti-terrorism law.
The leaders and activists were arrested in July last year following six months of public protests staged by the Muslims in the Ethiopian capital and in other towns. The protestor are by the Ethiopian government of interfering in the religious affairs of the Islamic population, which comprises around 35% of Ethiopia's 84 million population.
Ethiopian authorities have denied the allegations and blamed a small group of extremists for violent protests, which first begin in December 2011.
All the 29 arrested protestors are charged with plotting acts of "terrorism" under Ethiopia's controversial terror legislation. A move which is deeply concerning the New York based rights organisation has said.
The trial resumed on Tuesday after it was postponed for 40 days. "Ethiopia's deeply flawed anti-terrorism law raises serious fair trial concerns" it said in a press release on April 2.
According to Human Rights Watch, the case has already had major due process problems. Defendants said they were given only little access to legal counsel. Others alleged that they have faced ill-treatment in pre-trial detention.
Human Rights Watch added that the high court has since January 22 closed the hearings to the public, including the media, diplomats, and family members of defendants.
"There seems to be no limit to the Ethiopian government's use of its anti-terrorism law and unfair trials to stop peaceful dissent," said Leslie Lefkow, deputy Africa director at Human Rights Watch.
"The government's treatment of these Muslim leaders bears the hallmarks of a politically motivated prosecution." Lefkow added. The group has called on the Ethiopian government to review the 2009 passed terror law and noted a need for Ethiopian authorities to hold dialogue with the Muslim community to resolve the crises.
"Rather than jailing peaceful protesters and critical journalists, the government should amend the anti-terrorism law and stop these politically motivated trials," Lefkow said.
"The government should be reaching out to the Muslim community and discussing their grievances rather than silencing their voices and leaders."
Ethiopia has a secular government and prohibits government interference in any religion of the country.
Religion-related unrest is rare in Ethiopia and the country has a history of religious tolerance between Muslims and the dominant Christians.
More on This
Muslim Protesters Face 'Unfair' Trial