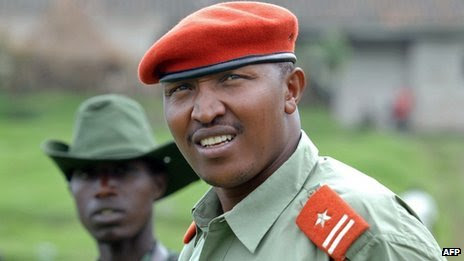 Since then Gen Ntaganda has fought for other rebel groups in the region, as well as the Congolese army.
Most recently he was believed to be one of the leaders of the M23 rebel group, which is fighting government troops in the east of the country.
The United Nations believes the M23 group is backed by the government of neighbouring Rwanda, though Rwanda denies this.
On Sunday, the DR Congo government said Gen Ntaganda, who comes from the Tutsi ethnic group, had fled to Rwanda after he and some of his followers were apparently defeated by a rival faction of the M23 group.
BBC East Africa correspondent Gabriel Gatehouse says that if Gen Ntaganda does reach the ICC, many will be hoping he can shed light on the accusations of Rwanda's involvement in the Congolese conflicts, including the backing of the M23 rebels.
Eastern DR Congo has been riven by conflict since 1994, when some of the ethnic Hutu groups accused of carrying out the genocide in neighbouring Rwanda fled across the border.
Gen Ntaganda appears to have been throughout the long conflict, fighting for both rebels and government armies.
His military career started in 1990, at the age of 17, when he joined the Rwandan Patriotic Front (RPF) rebels, now the ruling party in Kigali.
In November 2008, international journalists filmed him commanding and ordering rebel troops in the village of Kiwanja, 90km (55 miles) north of Goma in DR Congo, where 150 people were massacred in a single day.
In 2009, he was integrated into the Congolese national army and made a general following a peace deal between the government and rebel troops he commanded.
However, he defected from the army last April, accusing the government of failing to meet its promises.
It is not clear why Gen Ntaganda chose this moment to surrender, but there are suggestions the split in the M23 movement has made him vulnerable.
Posted by Guihon at 7:22 AM