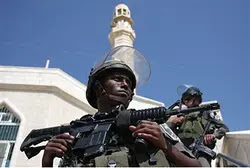 Soldiers (file)
Israel news photo: Flash 90
Those who call Israel a racist state may not like to hear it, but the IDF's Personnel Branch is planning to help Ethiopian-Jewish soldiers take their steps in the military by giving each of them a mentor. The mentors will be selected from the IDF's permanent professional corps ("Tzva Keva").
Major General Orna Barbivai, Head of Personnel Branch, told the IDFWebsite that "the idea is to take Tzva Keva staff from the [Personnel] Branch, on all levels, and to connectthem as a kind of mentor or companion to the soldier from the stage where he is a candidate for enlistment."
Officers and NCOs will accompany the soldiers through the training stages until they are integrated into their units.
During a visit to an Education Corps base on the occasion of the completion of a course in Hebrew, Maj. Gen. Barbivai told Ethiopian Jewish soldiers: "We are committed to the success of the members of the Ethiopian community. You have influence in the army and in society, and it is our job to ensure your success. I expect that you carry out a meaningful service out of the understanding that the IDF needs your influence and your contribution to this generation."
In a conversation with the Head Education Officer, Brig. Gen. Eli Sharmeister, and Educational  Corps commanders, Maj. Gen. Barbivai noted that she is "disturbed" by the relatively high proportion of Ethiopian Jewish soldiers in the military jails. "We must carry out steps of prevention and not just try to fix things retroactively," she explained.
The IDF Website has published official statistics that indicate Ethiopian Jews make up 11% of the prisoners in military jails – more than four times their relative size in the general population of IDF soldiers
Posted by Guihon at 2:24 AM