With jail terms for journalists and legal constraints on the activities of civil society groups, Ethiopia doesn't appear to be ticking the good governance boxes required of donors 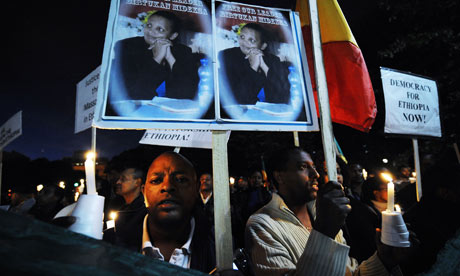 Ethiopians take part in a vigil in the US to demand the release of all political prisoners in Ethiopia. Photograph: Jewel Samad/AFP/Getty Images

UN human rights experts have expressed their dismay at what they see as the continuing abuse of anti-terrorism legislation to curb freedom of expression in Ethiopia.

The blunt criticism from the UN may not be so easy to shrug off by a regime usually impervious to foreign criticism. It recently brusquely dismissed a Human Rights Watch that accused the government of forcibly relocating thousands of people in the Gambella region.

The UN, however, is no mere NGO. Even though its criticism on Thursday may be water off a duck's back for Meles Zenawi, Ethiopia's prime minister and strongman for almost two decades, it does pose awkward questions for Ethiopia's aid donors. The EU development commissioner, Andries Piebalgs, last year unveiled the EU's agenda for change, putting human rights at the heart of its development policy.

One of the Department for International Development's (DfID) biggest bilateral aid programmes is with Ethiopia – £331m on average a year until 2015. The UK also places importance on human rights, and DfID recently suspended budget support for Malawi partly on governancegrounds after the Malawian government cracked down on demonstrations and passed a bill to make it easier for the government to place restrictions on opponents without legal challenge.

A DFID spokesperson said: "The prime minister, the foreign secretary and the secretary of state for international development have all raised concerns with Prime Minister Meles over the recent arrests of opposition leaders and journalists."

In Ethiopia's case, human rights experts spoke out after three journalists and two opposition politicians were given sentences last week ranging from 14 years to life imprisonment under Ethiopia's anti-terrorism laws. This follows the sentencing of two Swedish journalists to 11 years in prison last December, although they are expected to be given clemency and released. Even Meles realises that throwing foreign journalists into jail is not good for the country's image.

Ethiopian journalists may not be so lucky. UN experts are particularly concerned about the case of Eskinder Nega, a blogger and human rights defender who may face the death penalty if convicted. Nega has been advocating for reform on the issue of the right to assemble peacefully in public. Another 24 defendants are scheduled to appear in court in March, for various charges under the anti-terrorism law, several of whom may face the death sentence if convicted.

"Journalists play a crucial role in promoting accountability of public officials by investigating and informing the public about human rights violations," said Frank La Rue, the UN's special rapporteur on freedom of expression, who emphasised that "they should not face criminal proceedings for carrying out their legitimate work, let alone be severely punished. Ethiopia has an obligation to fully guarantee all individuals' right to freedom of opinion and expression under international human rights law".

UN criticism of Ethiopia coincides with a case that went before Ethiopia's supreme court on Friday. The court is considering a petition by the human rights council (HRCO), Ethiopia's oldest human rights organisation, to admit an appeal against the freezing of its bank accounts. The accounts were frozen after the introduction of the charities and societies proclamation (CSO) law, adopted by the Ethiopian parliament in 2009, ostensibly to regulate domestic and international NGOs.

The law prohibits human rights organisations in Ethiopia from receiving more than 10% of their funding from foreign sources. As a result of the restrictions in the CSO law and the freezing of its accounts, HRCO has been forced to close nine of its 12 offices and cut 85% of its staff.

In the words of one Ethiopian who runs an NGO, the CSO law – a similar measure is being considered in Cambodia – has strangled civil society.

"Ethiopia's once vibrant civil society has been severely decimated due to various legal and other impediments to its work imposed by the government," said Amnesty International, Human Rights Watch, the East and Horn of Africa Human Rights Defenders Project, and other groups in a statement. "The CSO law is just one in a series of laws passed since 2008 to give legal grounding to restrictions on freedom of expression and freedom of association."

The Ethiopian government accuses Human Rights Watch and Amnesty of misrepresenting the facts.

"As the government has repeatedly pointed out the law draws largely on laws in the developed world. It is not over-broadly defined nor is it vaguely worded as they claim," it says. "It should also be noted that the fact that someone represents the media or a political party does not exempt them from being responsible for what they do or from being tried by the relevant court if they give cause."

Be that as it may, what puzzles even regime sympathisers is why the Ethiopian government feels the need to muzzle dissent when Meles – respected by western governments for his competence and seen as an important ally with neighbouring Somalia in turmoil – is master of all he surveys.

The political opposition is toothless after many of its leading figures have given up and gone abroad. In legislative elections in 2010, Ethiopia's ruling party and its allies won more than 99% of the vote.

In a punchy speech at the recent African Union summit, Meles, who has been prime minister since 1995, made clear that his preferred model of development was China's.

Meles said: "China, its amazing re-emergence and its commitment for a win-win partnership with Africa, is one of the reasons for the beginning of the African renaissance."

Ethiopia may look east for inspiration, but western aid is not peanuts. EU aid to Ethiopia from 2006 to 2013 is €644m, covering food security and rural development, road infrastructure and, yes, governance.

"The EU supports Ethiopia's development strategy, notably in the agriculture and infrastructure areas, and poverty has declined over the last years," a EU commission spokesman said. "In the framework of our co-operation, there are no 'forbidden' topics. We have a regular political dialogue with the government, which covers all issues, including human rights, good governance, and freedom of expression."