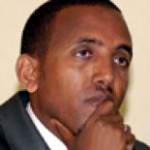 An Ethiopian politician standing trial for terrorism is said to be injured and in fear for his life after being attacked in his prison cell by a convicted murderer. The leader of the largest opposition party is appealing to Ethiopia’s human rights body to intervene in the case.

Two senior members of Negasso’s Unity for Democracy and Justice, or UDJ party, are among several politicians and journalists being kept at the prison while they face trial on terrorism charges.

Representatives of the Human Rights Commission did not answer phone calls seeking comment.

Negasso said Andualem Aragie, UDJ external relations and publicity chief, suffered possibly severe head injuries last week when he was beaten by a violent criminal placed in a cramped cell with him. After the incident, Negasso said the convict, who is serving a life sentence for murder, was moved to different cell, where he was placed next to another senior UDJ official being tried with Andualem.

Relatives who have seen Andualem say his head injury appears to have affected his ability to maintain his balance. His wife, a medical doctor, is reported to have urged him to seek medical help.

UDJ Deputy Chairman Hailu Araya said Andualem, however, is afraid to request hospitalization because of reports about harsh treatment given to terrorism suspects.

“Considering the danger he’s facing and the negative attitude the government has toward those people allegedly accused of terrorism, he’s afraid anything could happen in a hospital,” said Hailu.

Hailu accused prison authorities of deliberately placing a violent criminal in Andualem’s cell. He called the placement a violation of law and Ethiopia’s constitution.

“We are in a country where you cannot really depend on the law. You could complain, a complaint was lodged with the prison authorities, they simply dismissed it as a personal quarrel, so all they did was remove him to another place,” said Hailu.

Before his arrest, Andualem had been considered a rising star in opposition politics, becoming the UDJ’s chief spokesman and external relations officer. UDJ is the largest party in Ethiopia’s main opposition bloc Medrek.

Government spokesmen at the time strongly denied the arrests had anything to do with the suspects’ political activities. A senior official involved in the investigation said those charged were involved in a plot to commit acts of terrorism.

Attorneys say the defendants face a possible death sentence if convicted. Their trial is set to resume March 5.—Read more news at Voice of America.—-Photo credit: Andualem Aragie via Ethiomedia.