Under darkness in the Somali region of Ethiopia | Redress Information & Analysis 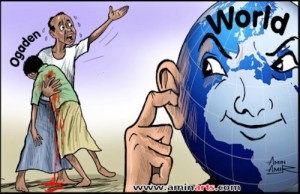 By Graham Peebles
No matter how tightly the truth is tied down, confined and suffocated, it slowly escapes. It seeps out through cracks and openings large and small, illuminating all and revealing the grime and shame that cowers in the shadows.
The arid Somali (or Ogaden) region of Ethiopia, home to some five million ethnic Somalis, has been isolated from the world since 2005, when the Ethiopian government banned all international media and most humanitarian groups from operating in thearea.

Human Rights Watch (HRW) reports that the Ethiopian government “has tried to stem the flow of information from the region. Some foreign journalists who have attempted to conduct independent investigations have been arrested, and residents and witnesses have been threatened and detained in order to prevent them from speaking out“. Aid workers with the United Nations, Médecins Sans Frontières (MSF) and the International Committee of the Red Cross, plus journalists from a range of Western papers, including the New York Times, have all had staff expelled and/or detained, by the Ethiopian regime, which speaks of democracy yet fails to act in accordance with its own liberal constitution and consistently violates international law, with total impunity.
Under the cover of media darkness and donor country indifference, the Ethiopian government, according to a host of human rights organizations, is committing wide-ranging human rights abuses that amount to war crimes and crimes against humanity. Serious accusations, based on accounts relayed by refugees and interviews with Ogaden Somalis on the ground, give what could be only a hint of the level of state criminality taking place in the troubled and largely ignored region. HRW makes clear the seriousness of the situation, stating that “tens of thousands of ethnic Somali civilians living in eastern Ethiopia’s Somali Regional State are experiencing serious abuses… Ethiopian troops have forcibly displaced entire rural communities, ordering villagers to leave their homes within a few days or witness their houses being burnt down and possessions destroyed – and risk death.”
In a detailed study conservatively titled Concerns Over the Ogaden Territory, the African Rights Monitor (ARM) found “that the Ethiopian government has systematically and repeatedly arbitrarily detained, tortured and inhumanly degraded the Ogaden people”. Women and children, they report, “are raped, sexually assaulted and killed”. The ruling Ethiopian People’s Revolutionary Democratic Front (EPRDF), they found, “systematically attacks the women and children as they are the weakest in a civil society” and are unable to defend themselves. Documenting a series of specific cases of violence, HRW  reports that “an Ethiopian government-backed paramilitary force [the Liyuu police] summarily executed 10 men during a March 2012 operation”. HRW “interviewed witnesses and relatives of the victims who described witnessing at least 10 summary executions. The actual number may be higher.”
Accounts such as these clearly warrant investigation by independent agencies, and yet they are resolutely ignored. Supporters of the regime know well what is occurring throughout the Ogaden, and yet they remain silent. America – the single biggest donor to the country, with military bases inside Ethiopia from where their deadly drones are launched into Somalia and Yemen – and Britain are close allies of the Ethiopian government but not of the Ethiopian people, it seems.

A regime of abuse

Page after page could be filled with detailed accounts of abuse from refugees who have fled the region, human rights groups and members of the Ogaden diaspora. According to Genocide Watch (GW), atrocities meted out to innocent civilians suspected of supporting the Ogaden National Liberation Front (ONLF) amount to “war crimes and crimes against humanity”. These include beating people to death, hanging people from trees, tying people with wire and holding them over burning chillies, rape and repeated false imprisonment – unjustifiable acts that are justified by the government as part of a “counter-insurgency operation” against the ONLF, which is predictably branded as terrorist.
Documented reports of human rights violations amounting to state terrorism are dismissed by the EPRDF government, which has a notoriously dismal human rights record. However, as Leslie Lefkow, HRW’s deputy director of Africa, says “if the Ethiopian government doesn’t have anything to hide, why don’t they allow independent investigators and journalists into the region”. There is, she says with understatement, “a lot of concern about the human rights situation on the Ogaden”. GW are more blunt, claiming unequivocally that Ethiopia is committing genocide in the Somali region, as well as to the “Anuak, Oromo and Omo” ethnic groups (or tribes). And it calls on the EPRDF regime to cease all attacks on the Ogaden Somali people and immediately release all prisoners, urging it to “adhere to it’s own constitution and allow its provinces the legal autonomy they are guaranteed”.

In 2005, implementation of the Ethiopian government’s policy of violent suppression in the Ogaden was transferred from the military to the newly-formed paramilitary group, the Liyuu police. As Faysal Mohmoud Abdi Wali,  38, a captain who defected from the Liyuu’s ninth regiment, based in Duhun  district, makes clear, the Liyuu is not a recognizable police force but “an extension of the military”, which operates under a cloak of impunity and lacks any accountability. Abdi Wali served in the Liyuu from its inception eight years ago, when it was called the ‘Liyuu Xayi’, and defected in 2012. His testimony is sof particular interest, especially given the media ban.
Abdi Wali was interviewd by Swedish journalists, Amnesty International and myself. He related how young men are forced to join the Liyuu’s police and arrested if they refuse. He confirmed findings by HRW that forced recruitment takes place among tribal groups whose elders are ordered, Abdi Wali says, “to bring at least 80 fighters for every single tribe. If any of these [recruited fighters] escapes from the militia they seek and capture [them] then [the escapee is] forced to kill one of his relatives or kinship”.
He recounts mass killings in “Hamaro, Sagag and Dhuhun of Fiq provinces”, where he says “large numbers of civilians accused of being ONLF sympathizers” were massacred. “These people are mostly killed by hanging from trees and girls are gang-raped and then murdered”.
He goes on to say “the youth in Dhuhun, the young men and the young women in Hamaro – the young men slaughtered in Degeh-bur and teens summarily executed [in] Denan and Dakhato”. Extra-judicial executions, intimidation and “forceful methods, strangling and rape of females aged 15-25”, are used as weapons of terror, “based on the advice we received from the regional president, Abdi Mohamud Omar, who said “indoctrinate the women with the male phallus and the men with guns”. Omar was largely responsible for the creation of the Liyuu, which evolved out of the Ethiopian army and was embraced by former Prime Minister Meles Zenawi.
The captain states he was an “eyewitness for unaccountable massacres” by Liyuu police who, after killing villagers, “burned the entire village to the ground”. They “forcefully remove them [the villagers] from the land and slaughter their livestock. In remote villages, they sometimes massacre them all. For example, they forcefully removed many villagers from Gudhis, massacring 125 members from that village and burned the village, in 2007.”
Soldiers are rewarded, he says, for killing civilians, for the “good job they have done”. Nomads who have the misfortune to see the Liyuu in action are killed, “in order to make sure that their information is not received by the ONLF rebels“. Summary executions, he reports, are commonplace, as “in Dakhato in June 2010 … [where] 43 nomads were killed”. Abdi Wali estimates the number of civilians murdered by the Liyuu since 2005 “to be in excess of 30,000 people”.

The Somali region, poor and desolate, is potentially the richest part of Ethiopia. Natural gas and oil have been discovered under the harsh surface and various contracts for exploration have been granted to international companies (without consultation with local, indigenous people, needless to say).
The current round of violence is to many people linked to the discovery of these natural treasures. GW relays how, “immediately after oil and gas were discovered in the Ogaden, Ethiopian government forces evicted large numbers of Ogaden Somalis from their ancestral grazing lands”. According to Abdi Wali the federal government “has strategic economic and land acquisition aims in the Ogaden region, intended to exploit the natural resources of the region”. These are strategic aims which they are seeking to realize by silencing the indigenous local people.
While some numbers, dates and locations from these and other accounts may be debated, the weight of claims of human rights violations and state criminality is, it would appear, beyond dispute, to the extent that GW has “called upon the United Nations Security Council to refer the situation in Ethiopia to the International Criminal Court”.
This necessary measure, together with a range of others (including the immediate release of all political prisoners, the correct distribution of all humanitarian aid to the needy, giving journalists open and unrestricted access, and a thorough investigation by independent observers) would be the right and proper course of action in the region. It is a course of action that should be urgently undertaken at the insistence of Ethiopia’s main donors: the United States, Britain and the European Union
Posted by Guihon at 12:08 PM