TRIPOLI, Libya — Libya’s interim authorities escalated their face-off against the International Criminal Court on Wednesday over custody of the most significant confidants to Col. Muammar el-Qaddafi taken prisoner since his ouster and death: his son Seif al-Islam el-Qaddafiand his brother-in-law Abdullah Senussi. The battle over the men’s fate is an early test of the former rebels’ commitment to the rule of the law. 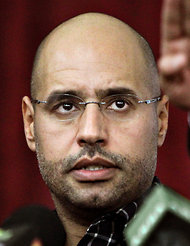 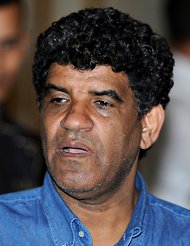 Abdullah Senussi, a former Libyan intelligence chief.
In both cases, the new Libyan authorities have made statements about the legal status of the captives in direct contradiction to the views of the court, which the rebels had lauded as an invaluable ally after it issued indictments charging Colonel Qaddafi, Mr. Qaddafi and Mr. Senussi with war crimes committed in their attempt to crush an uprising.
Human rights groups and some members of the Libyan government acknowledge that Libya still lacks effective police, prosecutors, courts and prisons, as well as the wherewithal to protect judges, lawyers or witnesses from potential retribution by armed militias. But the interim authorities say they are determined to try both defendants at home because of the secrets they might reveal about the actions and assets of the former government.
With scheduled elections only months away, Libyan officials also appear afraid to buck the demand for revenge by an increasingly impatient Libyan public.
On Wednesday, the mounting legal dispute over Mr. Qaddafi, who remains in the custody of a local militia in the town of Zintan, broadened to include Mr. Senussi, Colonel Qaddafi’s longtime intelligence chief.
France has also sought Mr. Senussi, who was convicted in absentia there of murdering 170 people, including 54 French citizens, in the bombing of a passenger jet in 1989. So his capture five days ago, by the Mauritanian authorities at the Nouakchott airport, has set off a multilateral scramble for the chance to try him. (French intelligence helped orchestrate Mr. Senussi’s capture.)
Libya immediately sent a delegation of its top officials to demand custody, and as they prepared to fly back from Nouakchott on Wednesday, they asserted that Mauritania had committed in principle to surrender Mr. Senussi to them. Mr. Senussi will “soon be in a Libyan prison,” declared Mustafa Abu Shagour, deputy prime minister in the interim Libyan government, according to Reuters.
Officials at the International Criminal Court in The Hague and in Mauritania quickly disputed that prediction. “No commitment of any sort has been given in this matter,” a senior Mauritanian official said, speaking on the condition of anonymity.
In the case of Mr. Qaddafi, who had been his father’s heir apparent, Mr. Shagour and other officials have said confidently in recent interviews that the International Criminal Court had consented to a trial here under its supervision. To help prove they could handle the case, the Libyans are building what he called a “five star” maximum-security prison, Mr. Shagour said.
But a spokesman for the International Criminal Court said that the decision of where to hold a trial had not yet been made, and that a trial could take place in Libya if the country successfully challenged the court’s jurisdiction. To do so, Tripoli would need to show that it could hold a credible and fair trial.
“Consultations” are still going on, one lawyer close to the prosecution said, and representatives of the court recently visited Tripoli to discuss procedures. But the Libyans’ pleas have so far failed to persuade the judges, who continue to press for a formal hearing to settle jurisdiction.
Some Libyan officials were frank about the growing conflict. “The I.C.C. wants Seif al-Islam for sure, because they say our justice system isn’t effective,” said Fathi Baja, a member of Libya’s Transitional National Council. He noted that the Libyan authorities did not yet have the ability to properly gather evidence or present a case.
“If you bring him to trial under these conditions, I think he will be found innocent,” he said, adding, “We are asking the attorney general to speed up the process because of the pressure from the street.”
Nick Kaufman, a lawyer in Jerusalem hired by Mr. Qaddafi’s sister Aisha, has complained that the Libyan interim authorities have blocked any communication with Mr. Qaddafi, preventing the designation of a lawyer who could represent him.
In the meantime, the court has appointed two lawyers from its public defense office, Jean-Xavier Keita and Melinda Taylor, to defend Mr. Qaddafi, and lawyers familiar with the court said at least one of them had been to visit him. The public defense office has prepared a critical report on his conditions, noting that Mr. Qaddafi is being kept in isolation without any contact with his family or the outside world.
People briefed on the report say that he is suffering from a severe toothache related to dental surgery shortly before the fall of Tripoli in August, but that he has been unable to see a dentist. These people say he has also been unable to see a doctor for follow-up care for a hand injury he suffered during his flight and capture.
David D. Kirkpatrick reported from Tripoli, and Marlise Simons from The Hague. Laura Martel contributed reporting from Nouakchott, Mauritania.
Posted by Guihon at 12:47 PM